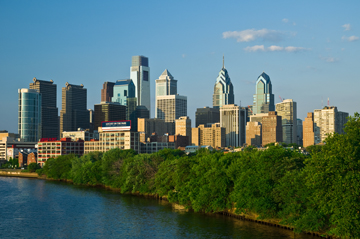 Photo by B. Krist for GPTMC

Did I have you at Bradley Cooper?Now that I’ve got your attention…

The City of Philadelphia, Bradley’s hometown, has developed a two-day itinerary for fans of Bradley, and his hit film Silver Linings Playbook, to see the spots highlighted throughout the movie. Here’s how you can spend your time in the City of Brotherly Love.

Noon – Ballroom at the Ben (834 Chestnut St.) doesn’t appear in the Silver Linings Playbook until Pat’s and Tiffany’s dramatic dance competition scene at the end of the movie, but you can start your trip to Philadelphia with a buffet lunch at the building’s Palace at the Ben (834 Chestnut St.), giving the spicy, rich curries of Northern India a stunning ambiance without compromising their authenticity.

1:30 p.m. – After lunch, swing around the corner to Jewelers’ Row (between 7th & 8th Streets and Chestnut & Walnut Streets) just as Pat and Tiffany did in the movie. Here you’ll find a dizzying selection of sparkle and bling—custom designed jewelry, hand-cut gems, one-of-a-kind estate pieces and other adornments—at more than 300 diamond and jewelry merchants.

3 p.m. – Once you’ve done your share of shopping, plan to get your history on by exploring some of the many Benjamin Franklin sites and memorials found in the city’s Old City neighborhood. (These sites aren’t in the movie, but Ben is lauded by Pat Sr., who says that Franklin is more American than a cowboy—the mascot of the Philadelphia Eagles’ rival Dallas Cowboys.)

7:30 p.m. – If the timing of your trip is right, you can end your night with a Philadanco performance. This renowned dance troupe appears on a poster in Tiffany’s in-home dance studio, and they perform at the Kimmel Center for the Performing Arts (300 S. Broad St.) each spring and fall. Every other weekend of the year, the Kimmel’s other resident companies and visiting artists take the stage.

10 p.m. – Grab a bite to eat or drink after the show (or before if you prefer), where acclaimed Garces Catering has recently taken over operations, or make a reservation at one of the many restaurants—Bliss (220 S. Broad St.), XIX (Nineteen) (Hyatt at The Bellevue, Broad & Walnut Streets, 19th Floor), Estia (1405 Locust St.), for starters—on or around the Avenue of the Arts.

10:30 a.m. – The Philadelphia skyline is featured prominently in the Silver Linings Playbook, and the tallest of those buildings is the Comcast Center, a 57-floor building that’s also the greenest in the country. Start your day with a viewing of The Comcast Experience, depicting realistic nature imagery, urban landscapes and much more on the largest four-millimeter LED screen in the world.

10:45 a.m. – After you’ve stood in awe of this super-sized screen, head downstairs to The Market & Shops for breakfast or lunch at some of Philly’s favorite eateries, such as Di Bruno Bros., Termini Brothers Bakery and more.

11:30 a.m. – Once you’ve eaten, hail a cab or hop in your car and head south to the Philadelphia Eagles’ Lincoln Financial Field (11th Street and Pattison Avenue), featured prominently in the film. While it’s difficult to score tickets for a game, tours of the field are available year-round and include stops at the pressroom, the field, the locker room and more. Before leaving the stadium, stop in the Philadelphia Eagles Pro Shop to pick up a DeSean Jackson #10 jersey similar to the one Pat wore in the film or a green cardigan sweater like the fanatical Pat Sr. sported. Another great spot to buy authentic football jerseys? Mitchell & Ness (1201 Chestnut St.), a haven for sports fans in Center City, Philadelphia that carries official reproductions of uniforms worn by professional baseball, basketball and football players, plus T-shirts, hats and other goods.

2 p.m. – If you can’t leave town without sitting in the booth where Pat and Tiffany had their first non-date on Halloween night, then head northwest of the city to the Llanerch Diner (95 E. Township Line Rd., Upper Darby). This 80-plus-year-old Upper Darby institution serves up your standard diner fare, along with Greek specialties such as moussaka, pastitsio and spinach pie, 24/7.

I’d be remiss writing about Philly without mentioning one of my favorite spots – Shane’s Candy (100 Market St.). Founded in 1911, the homemade candies and confections found within the shop are to travel miles for. Trust me, I know!

If at any time during your time in Philly you run into Bradley, you must let me know!