Recently, I was invited on a staycation at the new Le Méridien Tampa, which opened in June. I say new, but in fact, Le Méridien opened in Tampa’s downtown historic 100 year old federal courthouse. My husband and I have lived in Tampa for 13 years now (gasp!), and have longed to see the courthouse restored and renewed. We couldn’t wait to check into – and check out – Le Méridien Tampa.

Checking into Le Méridien Tampa was a breeze, and just off the hotel’s lobby, or Hub. What a sleek, comfortable place to sit back and relax with a coffee specially-prepared by the barista, or a craft cocktail when the time is right. In fact, it’s the hotel management’s intention that locals will come and use the space for work and leisure, as well as guests.

Once we settled into our room – a gorgeous corner space on the fifth (and top) floor with soaring ceilings, decorated in greys and blacks and whites – we met up with Dan, the front desk manager, for a tour of the hotel. As we walked, it became more and more evident that great care was taken in restoring the building to its original grandeur. During our tour, Dan mentioned that people who worked in the building – lawyers, judges, law clerks – are stopping in and sharing stories from when they worked in the building. Dan mentioned that those stories will be compiled and shared with guests to enhance their experiences.

The Hub, a guestroom and artwork found in Le Méridien Tampa.

We arrived at Le Méridien Tampa early-evening, and when we walked by Bizou Brasserie – where we would return a bit later for dinner – and its bar, the place was jumpin’! Bar tables were reserved for private parties, all seats at the bar were taken, and all of the surrounding lounge furniture was full, too. It’s evident that Bizou has quickly become a place to see and be seen in Tampa, and that’s fantastic!

Back at Bizou, did we ever have a dinner to remember! The restaurant’s menu is French-inspired, with loads of tantalizing dishes from which to choose. We started with a cheese plate with five delicious varieties, both domestic and import. Accompanied by a craft cocktail like the Cat’s Meow, that should’ve been enough. But no… I followed that up with the Lavender Tomato Tart – do yourself a favor, order one, or two. That tart has to have been one of the best dishes I’ve ever, ever had. (In fact, I see myself stopping by on the way home to pick one or two up for dinner at home. It’s that good.) Of course, the black grouper prepared a la the Alaskan Halibut with artichoke hearts was incredible, too.

Bursting at the seams, I’m not sure how we thought we could eat dessert, but knew we couldn’t pass up the chance to try the creations of the incredible pastry chef we’d heard so much about. And so, we split the blueberry cheesecake and trio of crème brulees. And that’s all she wrote!

As someone who travels often and treasures time with her family, one of the things that most appealed to me at Le Méridien Tampa is that it’s pet-friendly (up to 40 pounds)! Our pup, Lucy, was made more than welcome with dishes just for her, and a bag of goodies she couldn’t keep her nose out of!

Lucy made herself right at home at Le Méridien Tampa!

Unfortunately, we had to check out of Le Méridien Tampa early the following morning, and didn’t have a chance to indulge in breakfast back at Bizou. Of course, following the meal the night before, I’m not sure we would’ve had much room! Even the tempting pastries on display has to be bypassed… but we’ll be back!

A sample of the wallpaper in the Hub, the old judge’s bench and the old witness stand at Le Méridien Tampa. 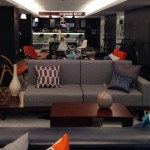 The Hub at Le Meridien Tampa. 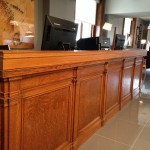 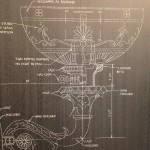 The wallpaper in The Hub plays from the building’s original blueprints. 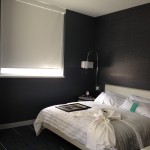 A guestroom at Le Meridien Tampa. 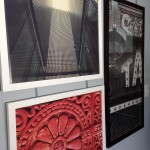 Artwork that hangs in the guestrooms. 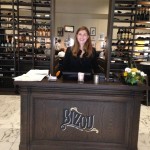 An old witness stand serves at the hostess station at Bizou. 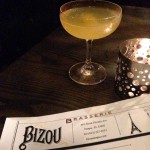 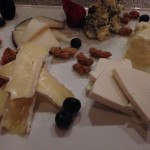 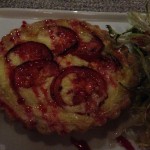 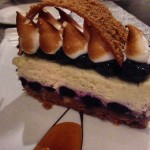 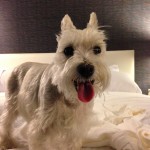 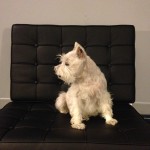