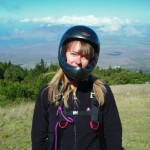 Most times, the only way I experience a place by air is when I fly in. But not during my recent trip to Maui! During the week I was on the magical island, I had the chance to experience the island by air – in three different ways!

I’ve been zip-lining a few times now, the first with my parents in Alaska and again in Denver this summer, and I always take advantage whenever I have the chance. And Maui was no different! GoZip Maui does things a little different than I’d done in the past, and was it ever fun! Rather than having to use my gloved hand to brake prior to gliding into the platform, their gear did all the work — all I had to do was sit back, relax and take in the views. And what incredible views they were!

The course I went on with our group had four lines  – one of the largest in the U.S.! — all offering unique views. The lines were really fun, too, in that they were parallel, so two people could zip at the same time. We glided hundreds of feet above a huge Chinese bamboo forest, and then towards the Pacific Ocean just beyond the coastline. The day was perfect, and we could seemingly see forever as we glided and flew through the air. What made the trip even more fun were our guides Katlyn, James and Rodney — all fun-loving and high-flying!

Blue Hawaiian has been flying over the Hawaiian Islands for more than 25 years, and I couldn’t wait to take my first helicopter flight with them! When making the reservations, I was asked that oh-so-delicate question: “How much do you weight?” Now, I realize the importance of weight on a helicopter, but still. And then, I was weighed just prior to boarding – after days of indulgent eating! Fortunately, the number on the scale wasn’t disclosed to me, or anyone in my group!

After the weights of all five of us passengers plus the pilot were entered, the computer determined where we’d all sit once on board. I was back row, second in from the door. And off we went on our flight over West Maui and Molokai! Captain Tim showed us vantage points otherwise inaccessible – amazing coastlines, rolling valleys, waterfalls and more. The entire experience was breathtaking. And a little queasy. Now, I don’t typically experience motion sickness, but my stomach did start feeling a little off during the flight! But I’ll do it again, no question!

Since high school, I’ve been intrigued with flight, and had even wanted to take flying lessons at one point. That never happened, but when I had the chance to go paragliding, I didn’t hesitate! I got up early one Sunday morning and met Dexter at Proflyght Paragliding. After signing my life away (not really, but there were several initials and signatures provided!), I joined Dexter and a van full of pilots for the 25-minute up the hillside. We passed the 4,500-foot “Echos” Launch and made our way to the 6,500-foot “Ferns” Launch. I didn’t have any hesitation as the van went up, up, up the winding road, and the camaraderie amongst the guys was terrific – they talked about past flights, tips for better flights, and a lot about kite surfing, which many of them were getting into. It seemed to me like a natural fit, anyway.

It’s no surprise Dexter is considered one of the best pilots around – his calm demeanor and voice had me relaxed and excited as we ran (“Faster! Faster! Faster!” he called) off the hillside and into the air. (Watch the video here!) There we were – effortlessly gliding through the air, catching thermals and rising even higher up; sailing down and around and back up again; and all the while, Dexter explained the why and what of what we were doing.When we got to the “Ferns,” I left Dexter to ready our sail. He gently finessed myriad wires into place, laid out the sail for take off, and then called me over. I climbed into my harness, put on my helmet and before I could muster any nerves, he asked if I was ready to go.” Sure!

After about 20 minutes of weightlessness and defying gravity, we came in for an easy landing. And in my mind, I was already planning my next flight. It was – and I don’t say this word often or even at all – awesome.

I’m not sure when I threw any underlying fears aside and took the air in these three different ways without any hesitation or concern, but am I ever glad I did – what a fascinating way to get a different perspective on any destination! And I can’t wait to do all three again – soon!