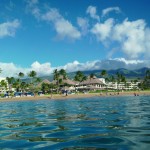 A visit to Maui can’t be complete without getting out on, in, or below the water’s surface. Whether you’re a surfer (board or kite), snorkeler, SCUBA diver, or sailor, the waters that surround Maui and the Hawaiian Islands are spectacular, and certainly command time to discover.

When I arrived on the island, I couldn’t wait to try surfing – again. Traci (of TheFullMoxie.com) and I took surf lessons in La Jolla, Calif. several years ago, and after a hiatus of all this time, I made arrangements for lessons to try it again. After all, what better place to really learn to surf than where the sport was born and first gained popularity!

There were six of us for lessons at Maui Wave Riders – I was teamed up with Mike from Houston, and Don from Mesa, Ariz., and our surf coach was JB. JB was fantastic! He sat our group down on boards and went over safety precautions and the six steps to get up on the board (I put some of them into yoga terms): cobra, table, lunge, warrior one, look where you want to go, SURF! Looking out into the water, the waves seemed to be tiny, and I wasn’t sure how there’d ever be enough momentum to get up and be pushed along.

Our trio spent about 45 minutes in the water, taking turns paddling out to JB, waiting for the “perfect” waves and trying to catch them. At first, I actually got up and partially rode a few waves in, ending with a back flop into the water each time. But the feeling of gliding across the water’s surface was exhilarating, and addictive! I can’t wait to try surfing again, but before I do, I’m definitely going to strengthen my yoga practice!

Looking back at the Sheraton Maui Resort & Spa from snorkeling

I’m an Army brat, and when I was in pre-K through second grade (my life is defined by where I was doing which grades in school!) my family lived on Oahu. Yes, I was a very lucky girl. It was there that I learned to boogie board (Bellows Beach) and snorkel (Hanauma Bay). I’d heard that the snorkeling right off the beach at our hotel, the Sheraton Maui Resort & Spa, was some of the island’s best. I couldn’t wait to don my mask and snorkel and take a look around under the sea!

Living in Florida for more than 11 years, I’m a wimp when it comes to water temperatures: I hardly go in here unless the Gulf is a toasty 85 – 90 degrees. Like I said, wimp! After gasping at the water’s temperature (really, not that bad), I sucked it up (and in!) and started taking a look around. WOW! What visibility, and what sea life just below the water’s surface and right offshore. Brightly colorful fish flitted about, what I call needle fish floated along oblivious to the people around, and cool black and white Black Durgons floated effortlessly through the water.

What I was really hoping to see while snorkeling, though, was a sea turtle. I volunteered for a while at the Clearwater Marine Aquarium, working with the rehabbing sea turtles and became enthralled with them. But I had never seen one in its natural habitat.

This sea turtle swam right by me!

On my last day at the Sheraton, I had about 45 minutes to spare, so I threw on my bathing suit and again donned my mask and snorkel, borrowing fins from the resort’s kiosk. As I snorkeled my way out and around the point of Black Rock and its aquarium-clarity waters, I spotted a small, white-tipped shark quietly peeking into the volcanic rocks’ crevices. “Cool!” I thought, and continued along. When I rounded the point, I came to the incredible underwater formations that provide haven for the different fish. And then I saw it – a Hawaiian Green Turtle effortlessly swimming along. I was thrilled – I couldn’t believe it! Several other snorkelers were in the area, and we all enjoyed the magical moments. Until one of the snorkelers touched the turtle’s shell. That’s when my animal activist-self broke free.I stuck my head out of the water and splashed the guy ‘til he came up, too. “HEY! You can’t touch him. DO NOT TOUCH THE TURTLE!” I was livid… absolutely no respect for wildlife on this guy’s part. (I later learned that there’s a $2,000 fine for disturbing sea turtles.)

The group that was watching the turtle pretty much broke apart when he swam away, and I was practically alone. I was about to go back to the beach, when I looked out into the hazy blue of the ocean just beyond. And here came another green turtle. He came right towards me, and then veered off to investigate the rock below. For a few moments of bliss, we swam together, and with the black and gray shark below. It was incredible, and an experience I won’t soon forget. (Watch the video here!)

There is another way to sneak a peak into life under the sea. A friend of mine, Nancy, tried the Atlantis Submarines Maui with huge plate-glass windows that provide views, without getting wet! A good option if you’re with someone who might not be into snorkeling or SCUBA, but still interested in the underwater world.

Back above the water’s surface, seeing Maui from out on the water is another vantage point that shouldn’t be missed. Our group took a sunset sail with the Pacific Whale Foundation (a portion of the proceeds go directly to the foundation to support research). Not only did we have front row seats for yet another awe-inspiring sunset, but incredible views of the island, and parts unseen from land. Of course, I love being on a boat at any time of day, but there is something magical about watching the day end floating above the water’s surface.

A visit to Maui is filled with myriad choices – on land, in the air, and on and in the water. I visited for a jam-packed week and did and saw loads, but there’s still so much left untouched. Whether visiting for a week, a month, or longer, there’s always something new to see and do in Maui. And I can’t wait to get back and continue the experiences!